Swamp People is a reality Television show that was created by the History Channel in 2010. The show  “Swamp People” follows the lives of a bunch of alligator hunters in Atchafalaya River Basin, Louisiana. Although a highly seasonal business, the show is extremely lucrative.

The total combined asset of all cast members is about $6 million. For instance, Troy Landry, one of the cast members, has made quite a fortune from the show.

The show runs for 30 days. It begins on every first Wednesday of September. However, that is not the only issue with alligator hunting. Each hunter is given a certain number of tags. One tag represents one alligator. So you can kill an alligator based on the number of tags you have.

Most of the cast members make their income in September. The rest of the year they hunt turtles and fish or get back to their regular jobs. 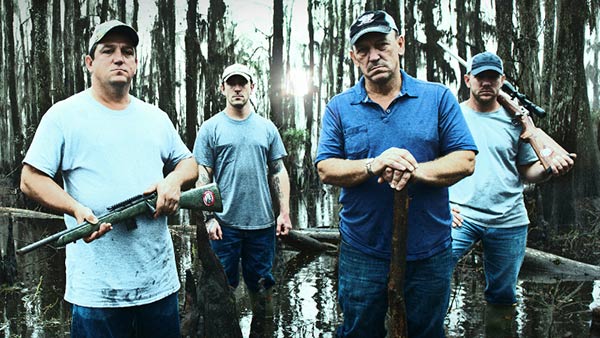 Troy Landry net worth and salary

Landry is an alligator and a reality star with a net worth of 2 million dollars and salary per episode is $10,000. He hails from Louisiana. Troy grew up in Atchafalaya Basin area of Louisiana. He comes from a family member that has been hunting alligators for generations.

R.J. Molinere Salary and Net Worth

Molinere is an American alligator hunter. R.J. Molinere net worth is estimated to be close to $500,000. He comes from Houmas, Louisiana. R.J is a cast member of the popular show “Swamp People”. Together with his son, Jay Paul Molinere, they hunt alligators as well as squirrels, and raccoons.

Jay is an American alligator hunter and a sharpshooter. He works with his father RJ Molinere, where they hunt for alligators every September. He is a cast member of the show “Swamp People.” At the moment, Jay Paul Molinere net worth is about $800,000 and salary of $45,00 per episode. His source of income is mainly from the TV show as well as other avenues.

Liz Cavalier Salary and Net Worth

Liz is an American reality TV personality and an alligator hunter. Swamp people cast Liz Cavalier net worth of $300,000 and salary of $5,000 per episode. He joined the reality show “Swamp People” in the 2nd season.

She worked together with her cast member Troy Landry and immediately proved to be resourceful. She was later named “Lucky Liz”, thanks to her amazing skills of hunting alligators.

Willie Edwards Salary and net worth

Edwards has made his fortune through appearing in commercial fishing and reality TV shows. Willie has been seen with other cast members on the show “Swamp People” including Liz Cavalier and Jay Paul who became the biggest stars in the US. In the recent estimates, Willie Edwards net worth is estimated to be about $500,000.

Jacob Landry Salary and Net Worth

Jacob is a reality star, assistant director, an American actor. He has appeared on a number of series and TV. However, many people know him from the reality TV show “Swamp People”. As a media personality, he makes good money from his career. Even there is no reliable information about his income, about Jacob Landry Net worth it is estimated to be somewhere around $6.5 million.

Chase Landry Salary and net worth

Chase Landry has made a lot of money from her reality TV show “Swamp People.” Swamp people cast Chase Landry Net worth is of $200,000 and she receives a salary of $3,000 per episode.

Pat Duke net worth and salary

Ron Methvin salary and net worth

Authoritative sources state that Ron Methvin net worth is more than $200,000. He makes a little over $60,000 and has made a lot over his career as a reality TV star of the show, “Swamp People.” Swamp People’s cast Ron Methvin earns a salary of $5,000 per episode.