At the moment, Kevin Hart is in severe condition because of an unfortunate car accident which has made buzzing headlines all over the internet. Let’s dig in as we conclude the real facts and outcomes of Kevin’s car accident. Read this to know if Kevin Hart is Paralyzed from the accident.

You’ all do know about the widely acclaimed comedian and Hollywood superstar, Kevin Hart. As a fantastic personality, he has been in the entertainment industry for a very long time.

Almost every age of audiences finds him funny and energetic. He has been showering his immense talent in different films, shows, and events giving the best time to his lovely fans and other celebrities.

The accident occurred around 1 AM on Sunday. Kevin was reported with two other in his car thrashing along the wind in the Mulholland Highway.

His car was found all smashed without a rooftop nearby a ditch 10 foot off the road trail around the Malibu Hills. It is a miracle that luckily all the people survived out of this wreckage disaster. 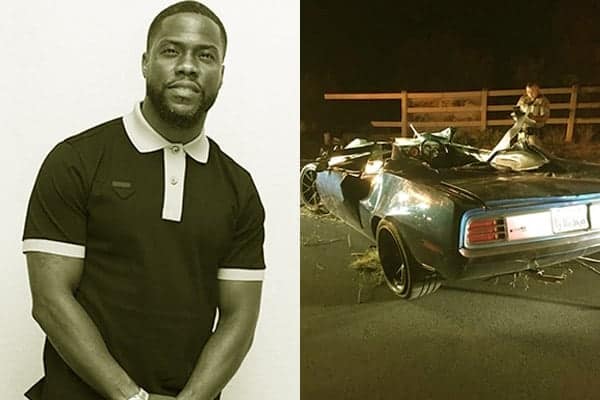 The police stated that the driver, Jared Black, was not drunk. He and Kevin are in hospital with the same major back injuries. The third person, Rebecca Broxterman, was fine as she was placed normal medical treatments.

The actor, Kevin, was in his classic blue Plymouth Barracuda, which was his 40th birthday gift to himself.

Is Kevin Hart paralyzed from Accident?

It was notified that his residence was near the accident scene. Immediately his security team showed up in an SUV and rescued him.

Kevin was rushed to his home for some medical consideration. However, he and the driver both were eventually treated at a hospital.

It can’t be said if Kevin Hart is paralyzed or not, but that horrific accident made an impact on his health. His back injuries have been gruesome till now, and further updates have still yet to come.