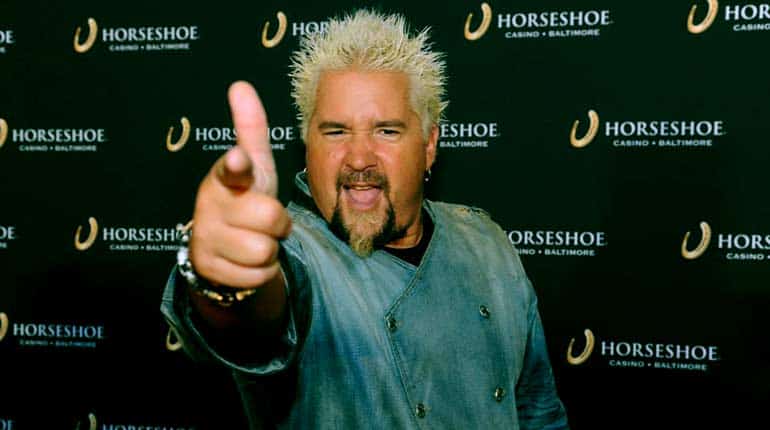 Food and TV lovers love this man, Guy Fieri. He has built a cult-like following that loves him to the core. He is building a worthwhile net worth through hard work in his career. This article seeks to unpack his life. By reading through you will get to know Guy Fieri net worth, house, cars, age, height, and wiki-bio.

Guy is a popular American chef, restaurant owner, television personality, and author. He is famous for hosting very popular shows on Food Network TV. Guy Fieri was born on January 22nd, 1968, in Columbus, Ohio, USA. He was born to his father, Lewis James Ferry, and mother, Penny Anne. He is American by nationality with Italian roots.

His paternal great-grandfather migrated to the USA from Italy. Guy changed his name from Ferry back to his family’s surname Fieri during his marriage in 1995, in honor of his great grandfather, Giuseppe Fieri. He is married to Lori Fieri who has two sons; Hunter Fieri and Ryder Fieri. 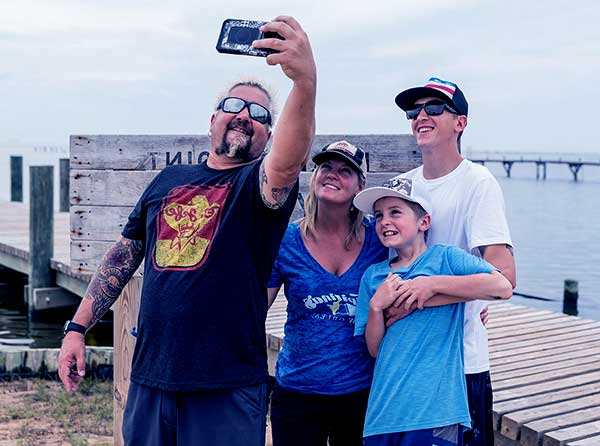 Guy Fieri did menial jobs while in grade school in Ferndale, so as to finance his studies in France. After his return, he got a job at the Red Lion Inn in Eureka, California where he worked till he left for college in Las Vegas.

He joined the University of Nevada where he graduated with a Bachelor of Science in Hotel Management in 1990. After graduation, he landed a job at a Long Beach California restaurant as a manager. He went on to start his own restaurants and appear on TV shows. This is discussed in other paragraphs of the article.

Guy Fieri’s work in the restaurant built him strong relationships. In 2005 his friends asked him to audition for a Food Network TV show called ‘The Next Food Network Star.’ He got a place and went on to win top position in 2006. It is after this win that he realized there was an opportunity in reality TV. He later in June 2006 started his own show ‘Guy’s Big Bite’ on the Food Network. 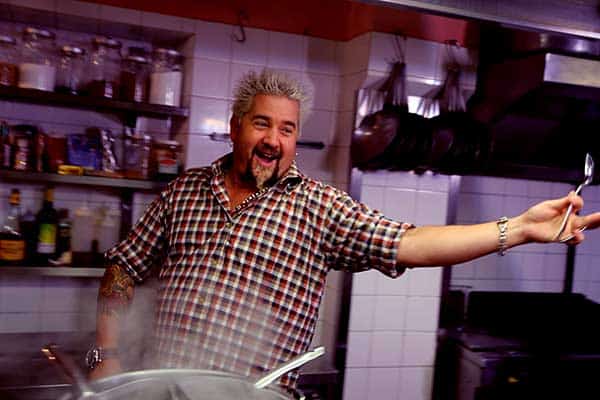 The show was such a great success and still runs to date earning him a great net worth. In 2006, Guy also started another show called ‘Diners, Drive-Ins and Dives where he would tour the world visiting drive-in restaurants and diners.

The show still runs and makes him a great deal of earnings. He has also appeared on such shows as ‘Minute to Win It’, ‘Rachael vs. Guy: Celebrity Cook-Off,’ ‘Guy off the Hook,’ and ‘Guy’s Grocery Games.’

How rich is Guy Fieri? Guy has worked very hard in his multi-faceted career. He has worked as a restaurateur, reality TV personality, chef, and author of cookbooks. Credible sources have estimated Guy Fieri’s net worth to be $8.5 Million. 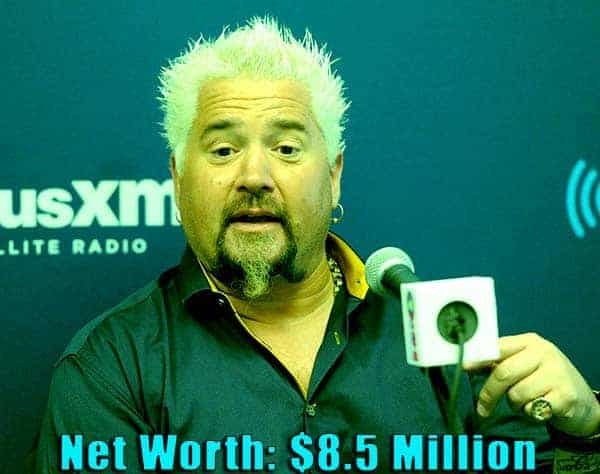 He is currently an owner of restaurants with several branches which earn him a substantial income. He is said to be earning about $100, 000 per episode from his TV appearances. Guy Fieri receives good earnings from brand endorsements such as an auto exhaust manufacturer called, Flowmaster, a restaurant chain called TGI, and an insurance company called Aflac.

In 1996, Guy Fieri joined hands with his friend Steve Gruber to open his first restaurant in Santa Rosa, California called Johnny Garlics. The success of this restaurant enabled them to open another one in Windsor, California. The third was opened in Petaluma, California in the early 2000 but was later closed in 2003. Their efforts were bearing fruits because in 2003 they opened a non-Italian restaurant called Tex Wasabi’s where they blended Southern BBQ and California-style sushi.

He went on to expand his restaurant business to New York by opening Guy’s Burger Joint, and Guy’s American Kitchen and Bar. He also opened a Las Vegas branch of Guy Fieri’s Vegas Kitchen and Bar. Guy Fieri has also tried his business luck on cruise ship kitchen business which successfully launched 19 branches. His new kid in the block is a beer and BBQ joint called Guy’s Pig & Anchor Smokehouse Brewhouse which was launched in 2017.

Guy Fieri owns a 1980 ranch-like house in Santa Rosa, California. It sits on a 7 acre land with olive trees and an orchard.  The house has three bedrooms each with a bathroom. The compound has a basketball court and a swimming pool. 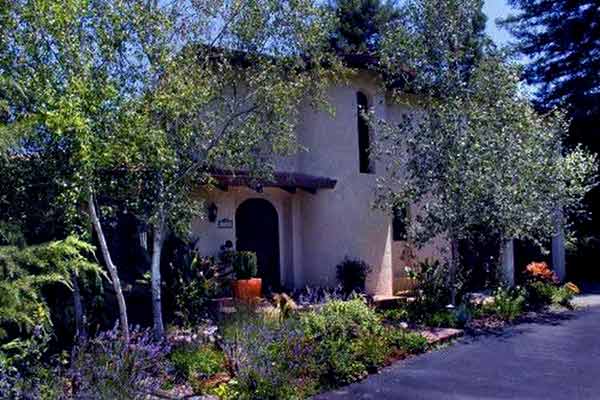 Guy Fieri is a car fanatic. He loves collecting cars and customizing them to his liking. His collections include a 1976 Jeep CJ-5 which is 40 years of age. The other collectible is a 1971 Chevrolet Chevelle, a 1969 Chevrolet Corvette, and a 2006 Chevrolet Kodiak. He also owns a Lamborghini Gallardo worth $200k.  His car range is all painted in Yellow. 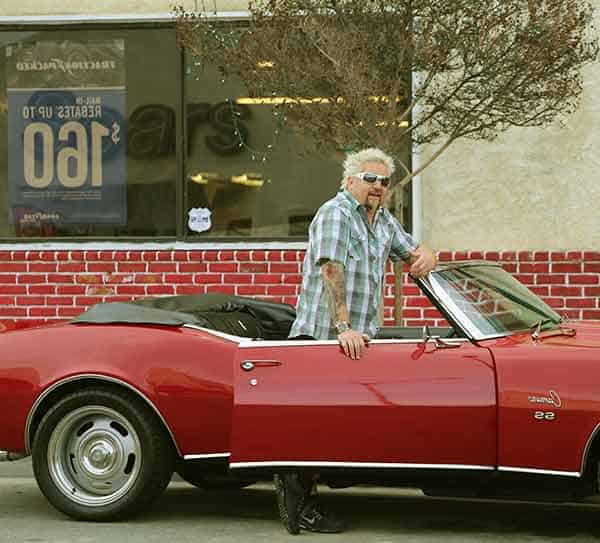 Guy Fieri with his car

How tall is Guy Fieri? Know his height 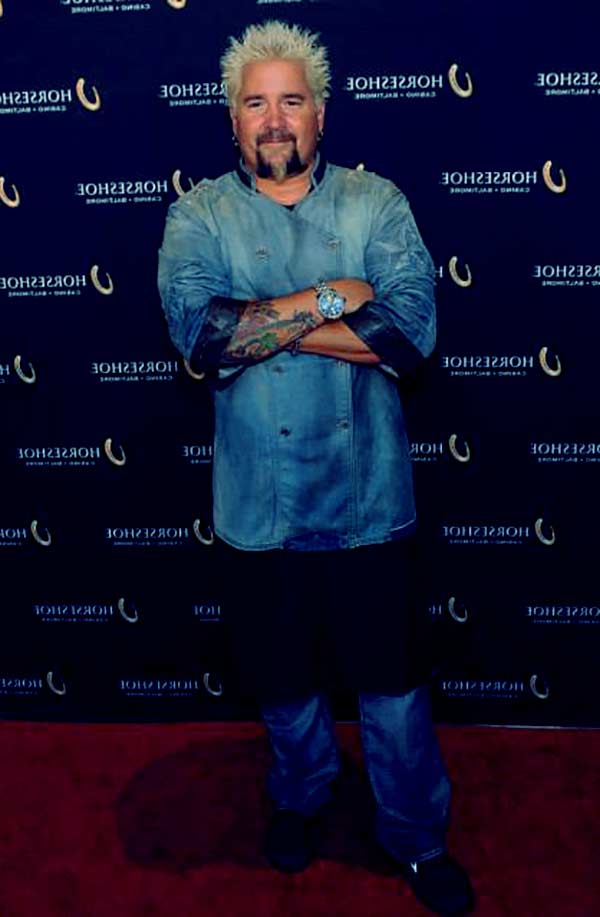 How old is Guy Fieri? Know his age, and birthday

Some famous Sayings and Quotes by Guy Fieri.

Guy Fieri is a man of vast experience and sometimes he throws some creative words during his shows. He has a way with words and sayings during his shows such as: “Peace, love and taco grease,” “Some people are just born to cook and talk,” “That [deep fryer] looks like the community pool in Flavortown,” and “His seafood is so fresh it’ll slap ya!.”